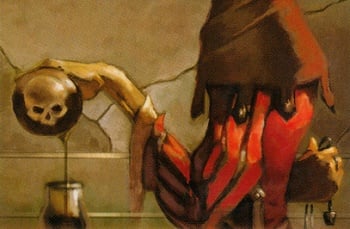 The tears of Lys is a rare and expensive poison, made by the alchemists of Lys.[1][2] It is clear, tasteless, odorless, and leaves no trace.[1][3] When dissolved in liquids and swallowed, the poison eats away at the stomach and bowels of the victim, and appears to be a disease of those organs.[3] Giving the victim a powerful purgative, if done early enough, may be the only thing that can save their life,[4][5] but even that may not be enough.[6] It is unknown if the poison has a connection with the Weeping Lady of Lys.

At the end of 54 AC, a maester and several women died on Dragonstone from a mysterious epidemic, that save for the maester seemed to only attack women. The first sign was a bloody stool, followed by a terrible cramping in the gut. Lord Rego Draz recognized the symptoms as those of the tears of Lys, and realized that the experienced maester had to die first so that the poison would not be recognized. The poisoner was Androw Farman, jealous of his wife Rhaena Targaryen's friendships with her ladies.[6]

In 135 AC, King Aegon III Targaryen was sharing a quiet dinner with his young queen, Daenaera Velaryon, as well as his friend and food taster Gaemon Palehair, when Gaemon collapsed from belly cramps and Daenaera also suffered from stomach pains. Grand Maester Munkun gave Daenaera a powerful purgative, which probably saved her life, but he came too late for Gaemon, who died within the hour. Munkun determined that the poison had been baked into the crust of the apple tarts, and identified it as the tears of Lys. While seven of the Red Keep's kitchen staff confessed under torture to attempting to poison the king, none could say where they got the poison, nor could they correctly identify what dish had been poisoned, so the confessions were dismissed by the Hand of the King, Thaddeus Rowan. Later, Thaddeus Rowan himself was arrested, and tortured until he falsely confessed to plotting with the Lyseni Rogares to poison both King Aegon and Queen Daenaera, to replace them with Prince Viserys Targaryen and his wife Larra Rogare. However, as King Aegon was known to not eat sweets, evidence pointed towards a frame of the Rogares by another culprit seeking the elimination of Queen Daenaera only.[4]

The Hand of King Robert Baratheon, Lord Jon Arryn, dies from what his maester, Colemon, believes was a chill on the stomach.[7][8] However, Jon's widow, Lady Lysa Arryn, sends a message to her sister Catelyn Stark alleging he was killed by Queen Cersei Lannister.[9] Varys tells Eddard Stark that Jon Arryn was poisoned with the tears of Lys.[1]

Tyrion Lannister sees the tears of Lys in Grand Maester Pycelle's collection of medicines and poisons.[11] Pycelle confesses to Tyrion that Colemon had been purging Jon Arryn in hopes of curing the illness, but that he sent Colemon away because he believed Queen Cersei wanted Jon dead. However, Pycelle swears he was not the one who poisoned Lord Arryn, and thinks it must have been Jon's squire Hugh.[5]

During Tyrion Lannister's trial for the death of King Joffrey Baratheon, Grand Maester Pycelle claims that Tyrion stole a sample of the tears of Lys, as well as other poisons from Pycelle's collection.[12]

Sansa Stark learns that Lysa Arryn put the tears of Lys in the wine of her husband, Jon Arryn, at the behest of her lover Petyr Baelish.[13]

In the Faceless Men's House of Black and White in Braavos, the waif teaches Arya Stark about the properties of the tears of Lys.[3]

Known victims of the tears of Lys

Sickness? This is no sickness. A weasel in the guts, dead in a day... this is the tears of Lys.[6]

The tears of Lys, they call it. A rare and costly thing, clear and sweet as water, and it leaves no trace. I begged Lord Arryn to use a taster, in this very room I begged him, but he would not hear of it. Only one who was less than a man would even think of such a thing, he told me.[1]

Tears, tears, tears. No need for tears... but that's not what you said in King's Landing. You told me to put the tears in Jon's wine, and I did. For Robert, and for us! And I wrote Catelyn and told her the Lannisters had killed my lord husband, just as you said.[13]