From A Wiki of Ice and Fire
(Redirected from Sand Snake)
Jump to: navigation, search

All of the Sand Snakes are said to have their father's eyes - by Magali Villeneuve. © Fantasy Flight Games 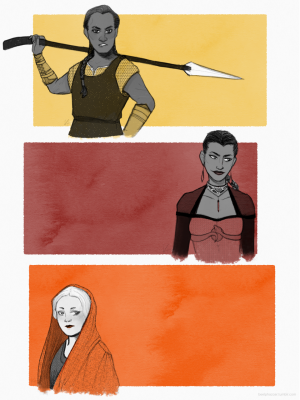 Obara, Nymeria, and Tyene, by Beelphazoar © 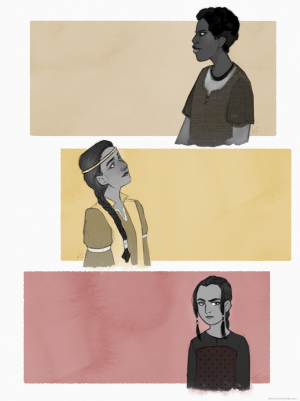 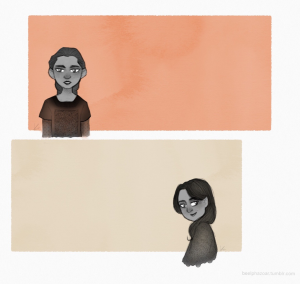 The Sand Snakes are the bastard daughters of Prince Oberyn Martell.[1][2] The collective name references the Dornish bastard surname, Sand, and their father's nickname, the Red Viper. Oberyn's eight daughters have been born to five different mothers.[3] While they differ in appearance, they are said to all have their father's eyes in shape if not in color.[1]

The three eldest Sand Snakes—Obara, Nymeria, and Tyene—try to stir Doran Martell, Prince of Dorne, into declaring war against the Iron Throne in revenge for the death of their father, Oberyn Martell, at the hands of Ser Gregor Clegane in King's Landing. Doran orders his captain of guards, Areo Hotah, to take all Sand Snakes into custody, however. While the youngest Sand Snakes pose no threat, Doran wants to prevent anyone from using them against him. Sarella remains free, however, because she is outside of Dorne.[1]

Obara, Nym, and Tyene are confined to cells in the Spear Tower of Sunspear.[4] Elia, Obella, Dorea, and Loreza are secluded in the Water Gardens along with their mother, Ellaria Sand.[5] Doran's daughter, Princess Arianne Martell, plans to crown Princess Myrcella Baratheon and then free the Sand Snakes. Her plot is halted by Areo at the Greenblood, however.[6]

Obara, Nym, Tyene, and their cousin, Arianne, are released from captivity and are present at the feast in which the Mountain's skull is presented to the Dornish court.[2]

His tourneys, his battles, his duels, his horses, his carnality ... it was said that he bedded men and women both, and had begotten bastard girls all over Dorne. The sand snakes, men called his daughters. So far as Tyrion had heard, Prince Oberyn had never fathered a son.[8]

All of Prince Oberyn's daughters have his viper eyes, Hotah realized suddenly. The color does not matter.[1]

It would gladden my heart if I could assure you that the Sand Snakes were alone in wanting war, but I will not tell you lies, ser.[4]

Arianne: Are you certain you are not off to some other bed, some other woman? Tell me who she is. I will fight her for you, bare-breasted, knife to knife. Unless she is a Sand Snake. If so, we can share you. I love my cousins well.
Arys: You know I have no other woman. Only ... duty.[4]

Arianne loved all her bastard cousins, from prickly, hot-tempered Obara to little Loreza, the youngest, only six years old. Tyene had always been the one she loved the most, though; the sweet sister that she never had.[5]