From A Wiki of Ice and Fire
Jump to: navigation, search
"Qhorin" redirects here. For the Lord of Volmark, see Qhorin Volmark.

Qhorin, known as Qhorin Halfhand and the Halfhand,[4] is a ranger of the Night's Watch and second-in-command at the Shadow Tower. In the television adaptation Game of Thrones he is portrayed by Simon Armstrong.

Qhorin Halfhand is tall and clean-shaven with gray eyes. He lost all fingers but the thumb and forefinger on his right hand to a wildling axe.[5] He wears his grey hair in a long braid.[6]

A living legend in the Night's Watch, Qhorin is considered to be one of their best rangers. He is called Halfhand because he lost all the fingers on his right hand except his thumb and forefinger to a wildling axe. Because of this, he trained how to fight left-handed and became just as proficient with his left hand as he had been with his right.[5] He was once a good friend to Mance Rayder before Mance deserted the watch. 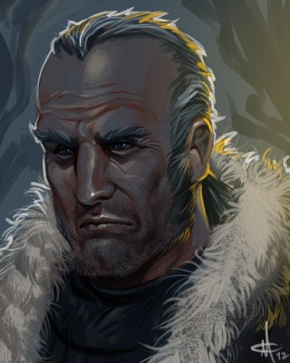 Qhorin is placed in command of a force from the Shadow Tower charged to meet up with Lord Commander Jeor Mormont to participate in the search for Benjen Stark. On the way to the rendezvous, he runs into a wildling scouting party led by Alfyn Crowkiller, which he practically destroys at the cost of four dead and a dozen wounded. A prisoner taken in the battle reveals that Mance Rayder was in the Frostfangs searching for some magic to bring down the Wall.

When Qhorin meets Lord Commander Mormont at the Fist of the First Men, he advises sending three scouting parties into the mountains to discover what Mance was looking for, one of which he leads personally.[5]

Qhorin's party is composed of the brothers Dalbridge, Ebben, Stonesnake, and Jon Snow. The patrol nears Mance's camp but is spotted and forced to retreat with wildlings in hot pursuit. Qhorin unsuccessfully tries several methods and diversions to throw off the pursuit. In the end, only he and Jon remain, and Qhorin orders Jon to yield if they are caught, in order to act as a spy. When Rattleshirt catches up with them, Jon does as ordered and kills Qhorin with Longclaw to show his sincerity.[6]

Ygritte wears Qhorin's cloak as her own.[7] After the attack on Castle Black, Ser Alliser Thorne and Janos Slynt disbelieve Jon's story of Qhorin's last command.[8]

We can only die. Why else do we don these black cloaks, but to die in defense of the realm?[5]

Qhorin Our honor means no more than our lives, so long as the realm is safe.


Qhorin: Then hear me. If we are taken, you will go over to them, as the wildling girl you captured once urged you. They may demand that you cut your cloak to ribbons, that you swear them an oath on your father's grave, that you curse your brothers and your Lord Commander. You must not balk, whatever is asked of you. Do as they bid you ... but in your heart, remember who and what you are. Ride with them, eat with them, fight with them, for as long as it takes. And watch."[6]
—Qhorin and Jon Snow

I will see, and hear, and learn, and when I have I will carry the word back to the Wall. The wildlings had taken him for an oathbreaker, but in his heart he was still a man of the Night's Watch, doing the last duty that Qhorin Halfhand had laid on him. Before I killed him.[7]

Qhorin was my enemy. But also my brother, once. So ... shall I thank you for killing him, Jon Snow? Or curse you?[7]

The Halfhand could have killed me as easy as you swat a bug.[9]

Qhorin on the Game of Thrones wiki.