Ten Towers is located on the eastern coast of Harlaw.[1] 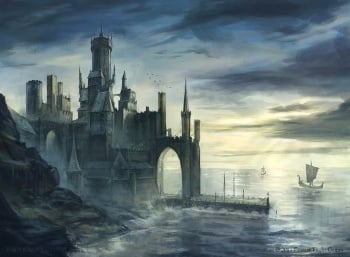 The main hall is the location of the high seat of House Harlaw. Two giant scythes of beaten silver crossed hang crossed above the seat.[3]

The Widow's Tower is so called due to the presence of Lord Rodrik Harlaw's sister, Lady Gwynesse Harlaw, who came back to Ten Towers after the death of her husband and stayed for the rest of her life, grieving her loss.[3]

The Book Tower is the fattest of the ten towers. It is octagonal and made of large block stones.[3]

A village lies near Ten Towers.[3]

The newest castle in the Iron Islands, Ten Towers was built by Lord Theomore Harlaw, who blamed the deaths of three infant sons on the dampness of ancient Harlaw Hall, which often flooded. The new castle was built at a better site, but the mercurial Theomore constructed ten towers different in appearance. There is good fishing off the Long Stone Quay.[3]

While growing up Asha Greyjoy felt more at home at Ten Towers than at the Greyjoy seat of Pyke. She enjoyed racing amongst Ten Towers' walks and bridges and reading in Lord Rodrik Harlaw's library.[3] Rodrik once kept septons at the castle to maintain his library.[3] 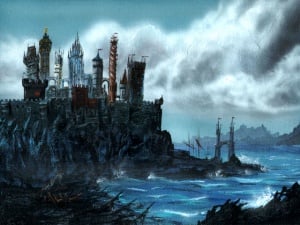 After meeting with the steward Three-Tooth and her mother, Alannys Harlaw, Asha has the captive Lady Sybelle Glover and her children, Gawen and Erena, quartered in one of the towers instead of the dungeon. Asha meets her uncle, Lord Rodrik Harlaw, within the Book Tower. He offers to name her heir to Ten Towers, but Asha refuses and wants the Seastone Chair instead.[3]

After Euron Greyjoy is chosen King of the Iron Islands in the kingsmoot, Asha flees from Old Wyk to Ten Towers. She leaves Gawen and Erena Glover at Ten Towers in the care of her mother, Alannys, and aunt, Gwynesse Harlaw, but continues on to Deepwood Motte with the captive Lady Glover.[4]

Not one castle, ten castles squashed together.[3]