From A Wiki of Ice and Fire
(Redirected from Daario)
Jump to: navigation, search

Daario Naharis is a Tyroshi captain of the sellsword company, the Stormcrows.[2]

In the television adaptation Game of Thrones, Daario is portrayed by Ed Skrein and Michiel Huisman.[3][4]

Daario is lithe and smooth skinned[5][6] with bright, deep blue eyes which can appear almost purple.[7][8][9] His curly hair reaches his collar, and he keeps his beard cut in three prongs.[5] Daario dyes his hair and trident beard, sometimes in blue[5] and other times in deep purple.[8] His fingernails are also enameled blue. Daario's mustachios are painted gold, and he has a large, curving nose.[5] A golden tooth gleams in his mouth.[5]

Daario is dangerous[7][10] and like most sellswords is fickle, faithless, and brutal.[11] The mocking man is quick to anger and is reckless.[6][12] The sellsword is glib[13] and greedy.[7] He is unable to read the Common Tongue of Westeros.[6]

The sellsword dresses in loud colors and finery. One yellow outfit, for instance, includes a foam of butter-colored Myrish lace, a doublet with brass medallions in the shape of dandelions, and suede gloves. His high leather boots have ornamental goldwork, and his belt has gilded rings.[5] Another outfit consists of striped pantaloons, high boots of purple leather, a white silk shirt, and a vest of golden rings.[11] Daario also possesses a heavy black cloak.[5]

Daario wears a Dothraki arakh on his left hip and a Myrish stiletto on his right hip. Their golden hilts are a matched pair of naked women who appear wanton.[5] 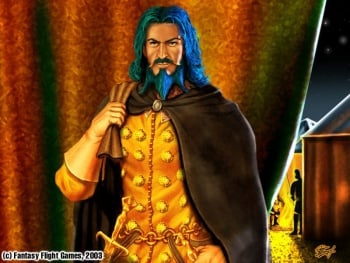 Daario with the heads of Prendahl and Sallor, by Amok ©

The Stormcrows are a company of freedmen, and therefore the question of breaking the contract with Yunkai has to be put to each man. While that debate is going on in the camp, Daario, won over by Daenerys, kills Prendahl and his fellow captain, Sallor the Bald, and brings their heads to Daenerys as proof that the Stormcrows are joining her. Ser Jorah Mormont does not trust Daario, but the Stormcrows contribute to Daenerys's victory in the battle near Yunkai.[5]

Daario leads the Targaryen van during the march on Meereen. Each day he gives Daenerys flowers and plants, and he tries to spare her from seeing the bodies of slave children killed by the Great Masters.[7] After the siege of Meereen, Daario leads the Stormcrows in collecting a tenth whenever someone sells themselves into slavery.[8] 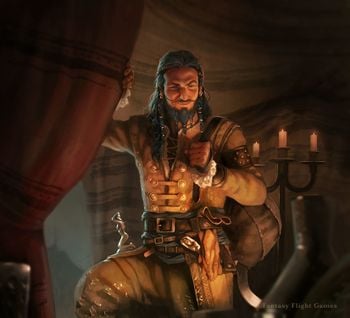 Daenerys sends Daario as an ambassador to the Lhazareen with the mission of reopening the land trade routes between Lhazar and Meereen.[13] He leads the Stormcrows in fighting on the Khyzai Pass against the Long Lances.[11]

After the Green Grace suggests that Daenerys wed Hizdahr zo Loraq to bring peace, Daario angers the queen by suggesting she slaughter the Great Masters who would assemble at the wedding feast. Daenerys orders the Stormcrows to patrol the Yunkish hinterlands and protect the Khyzai Pass, with Daario reporting to Ser Barristan Selmy, Lord Commander of the Queensguard.[11]

While evading the second siege of Meereen, Daario is wounded by a crossbow which cuts his temple. The captain claims to have killed one of his serjeants who wanted to defect to the Yunkai'i.[14] Infatuated with the sellsword,[11][15] Daenerys begins sleeping with Daario after his return to Meereen,[14] and the sellsword angers Barristan by kissing the queen in public.[6] Daario refers to the aged knight as "Ser Grandfather".[16]

Prince Quentyn Martell, Ser Archibald Yronwood, and Ser Gerris Drinkwater disguise themselves as sellswords and join Daario's Stormcrows. After the Dornish knights reveal their identities to Daenerys, an angry Daario distrusts them.[6][12]

Daario becomes bad tempered when Dany agrees to weds Hizdahr. Although he does not attend the wedding at the Temple of the Graces, Daenerys secretly hopes that her sellsword lover will intervene and abscond with her.[6] The sellsword becomes more wild after the wedding. Daario, Groleo, Hero, Jhogo, and Hizdahr's sister and two cousins are given as hostages to the Yunkai'i to vouchsafe for Daenerys's good intentions for peace.[12] Daario leaves his blades decorated with wanton women in Daenerys's care.[17]

After Daenerys disappears from Daznak's Pit on the back of Drogon,[18] the Yunkai'i refuse to release the hostages until her other two dragons, Rhaegal and Viserion, are executed.[19] When Barristan and Skahaz mo Kandaq plot against King Hizdahr, the knight wants Daario to be rescued from the Yunkai'i while the Shavepate suggests that Daario be allowed to die so that the Stormcrows can choose a new leader.[16] As Daario remains a prisoner of the Yunkai'i, command of the Stormcrows passes to the Widower and Jokin.[20] 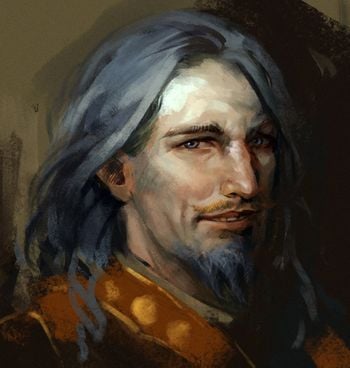 Better the butcher than the meat. All kings are butchers. Are queens so different?[11]

Daenerys: You boasted that you'd had a hundred women.
Daario: A hundred? I lied, sweet queen. It was a thousand. But never once a dragon.[14]

Daenerys: Where are you going?
Daario: Out into your city, to drink a keg or two and pick a quarrel. It has been too long since I've killed a man. Might be I should seek out your betrothed.[6]

I have seen how false men are. Very few are worthy of trust, and Daario Naharis is not one of them. Even his beard wears false colors.[5]

She was a queen, and Daario Naharis was not the stuff of kings.[9]

He is a monster. A gallant monster, but a monster still.[11]

He has a sellsword's conscience, That is to say, none at all.[6]

If he did not betray her, he would master her. She did not know which of those she feared the most.[12]

Daenerys Targaryen loved her captain, but that was the girl in her, not the queen.[16]

Her love for Daario is poison. A slower poison than the locusts, but in the end as deadly.[16]