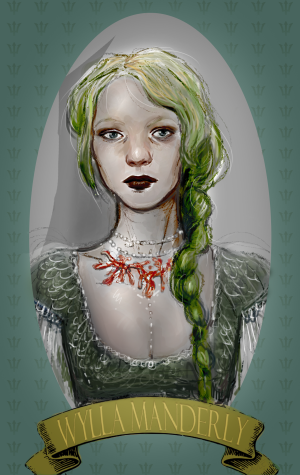 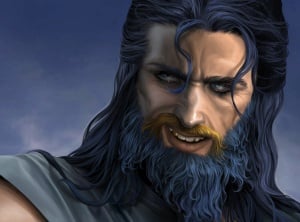 Hair dye is a cosmetic used by characters in A Song of Ice and Fire to colour their hair and beards, sometimes the colours used can be quite outrageous, such as blue[1], purple[1][2], green,[3][2] scarlet,[4] pink,[5] and orange.[6]

Hair dye is more fashionable in the Free Cities especially amongst the Tyroshi,[7][8] which is a major supplier of hair dye. There, a unique variety of sea snail was discovered not long after the city was founded. These snails secreted a substance that, when properly treated, yielded a dye that soon became very fashionable among the nobility of Valyria. This led to merchants traveling to Tyrosh by the thousands. Tyroshi dyers quickly learned to produce different colors of dyes by varying the diet of the snails.[8]

Some characters dye their hair not for the sake of fashion but in order to disguise themselves.[11][12] Bright colored hair dyes are not that common in Westeros.[13]

After the death of her brother-husband, Prince Aegon the Uncrowned, Princess Rhaena Targaryen dyed the silver hair of their twins daughters, Aerea and Rhaella, to escape from King Maegor I Targaryen. However, the ploy did not worked and the girls were found by Tyanna of the Tower, one of Maegor's wives.[14]

In 50 AC, Aerea's hair were dyed in muddy brown by order of her grandmother, Queen Regent Alyssa Velaryon, to desguise her as a common girl and not be found by Ser Ronnal Baratheon.[13]

Septa Eglantine puts brown dye in Myrcella Baratheon’s hair when they are aboard the Seaswift, on the way to Braavos. She tells Mycella that it is a game, but Myrcella realised that it was meant to keep her safe in case the ship was taken by her uncle Stannis.[15]

Lysa Tully tells Sansa Stark she looks too much like her mother and that in order to disguise her, her hair will have to be darkened before she is brought to the Eyrie.[16] 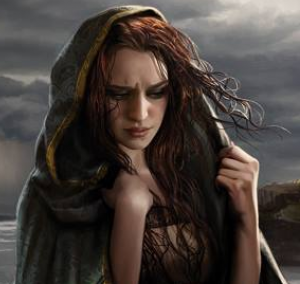 Sansa Stark has to dye her hair before arriving in the Eyrie. © FFG

In the Eyrie Alayne Stone dyes her hair with a wash given to her by her aunt Lysa. The wash comes from Tyrosh, across the narrow sea. It changes her own rich auburn into a burnt brown, but it is seldom long before the red begins creeping back at the root. Alayne worries what she will do when the dye runs out.[17]

The captain of the Huntress tells Samwell Tarly that ironmen captured a Tyroshi merchantman on the straits a fortnight ago. They killed her crew donned their clothes and used the dyes they found to colour their whiskers half a hundred colours meaning to sneak into Oldtown - but the oarsmaster of the Lady of the Tower was able to detect this trap.[12]

Cercei observes the Blue Bard noticing that he even dyes his hair blue.[18]

Daenerys Targaryen’s paramour Daario Naharis dyes his hair back to blue to please her.[1]

Some characters who dye their hair

During A Song of Ice and Fire

My mother was a lady of Tyrosh. I dye my hair in memory of her.[11]