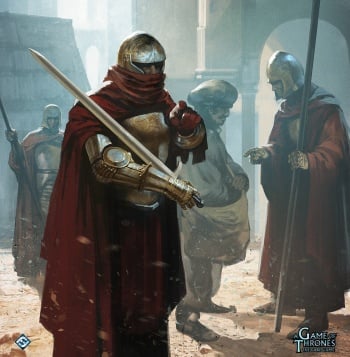 Along with their red cloaks, some Lannister guards wear mail shirts over boiled leather and steel caps with lion crests.[6][1]

Ser Ilyn Payne was the captain of the guard for Lord Tywin Lannister when he served as Hand of the King to Aerys II Targaryen.[7]

In the aftermath of the Sack of King's Landing, the bodies of Rhaenys and Aegon Targaryen were wrapped in the crimson cloaks of Lannister guards, with the red helping to mask their blood.[8]

After having discovered the relationship between Tysha and his son Tyrion, Tywin gave Tysha to a barracks of Lannister guards to be gang raped.[9]

While chasing a black cat in the Red Keep, Arya Stark is met by a septa. She sends Godwyn and another red cloak to catch Arya, but the girl escapes into the cellars of the castle.[4]

A squad of Lannister guards led by Tregar accompany Ser Jaime Lannister when he confronts Lord Eddard Stark in the streets of King's Landing.[10] Tregar and four other red cloaks die from the ensuing battle, while three House Stark guards are killed and Ned is wounded.[11]

Queen Cersei Lannister is guarded by twenty Lannister guards when Eddard presents the late King Robert I Baratheon's will, but Ned expects the support of the City Watch of King's Landing. Janos Slynt has a hundred gold cloaks support Cersei instead of Ned, however, and the remaining Stark guards are killed during Petyr Baelish's coup.[6] Ser Meryn Trant of the Kingsguard brings five red cloaks when he tries to arrest Arya. Syrio Forel defeats the five and allows Arya to escape from Meryn.[1]

Captain Vylarr commands the hundred-strong household guard of Cersei Lannister in the capital.[12] Following the queen's orders, Vylarr's men take begging brothers to the dungeons.[2] Bronn becomes the captain of the personal guards of Tyrion Lannister, acting Hand of the King, and is given a crimson cloak. The former sellsword is also named an officer of the gold cloaks.[13]

Depriving his sister of her guards, Tyrion sends Vylarr with the hundred as Ser Cleos Frey's escort when he returns to Riverrun.[2] Four of the guards are false envoys sent by Tyrion to free Ser Jaime Lannister from Riverrun's dungeon, however. The four are hanged after their failed attempt, along with some red cloaks who came to their aid against Tully guards. The rest of these red cloaks are imprisoned in Riverrun.[14]

Osfryd leaves the red cloaks and succeeds Ser Addam Marbrand as the Commander of the City Watch of King's Landing.[16]

Vylarr serves as the captain of guards at Casterly Rock.[17] There are hundreds of Lannister guardsmen in the Red Keep in the aftermath of the War of the Five Kings.[18]