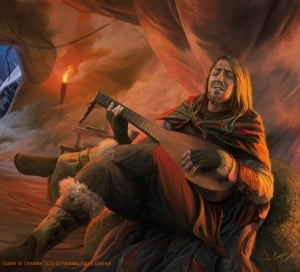 The lute is a musical instrument of the plucked string family. It is comprised of a body and a neck that serves as a handle and as a means of stretching the strings beyond the body. A musician who plays the lute is called a lutenist. 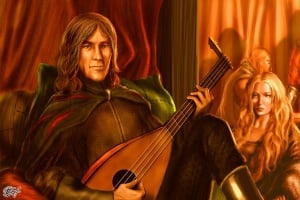 Mance playing the lute, with Val in the background - by Amok ©

Ser Tom the Strummer, the young Jaehaerys I's court singer,[1] was presumably a lutenist judging by his epithet.

The knight Ser Raymond Rychard used a shield that had a lute on a purple field among other things during the tourney at Ashford Meadow in 209 AC.[2]

When Lord Farman grew defiant to House Lannister's influence, Tywin Lannister sent a musician to Faircastle who performed The Rains of Castamere on a lute. Lord Farman caused no further trouble after hearing the message.[3] 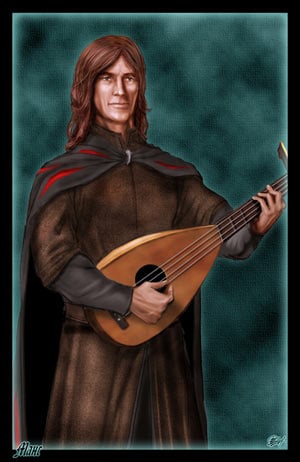 In disguise, Mance Rayder travels to Winterfell and plays the lute at the feast for King Robert.[4]

When Jon Snow is brought before Mance Rayder, the king is playing his lute and singing The Dornishman's Wife.[4]

Symon Silver Tongue informs Tyrion Lannister that Alaric of Eysen is one of the seven singers chosen to sing at the wedding feast of King Joffrey and Queen Margaery, where he will compete for a gilded lute with silver strings.[5] Galyeon of Cuy is also among the competitors. The competition is interrupted when the king dies after drinking poisoned wine.[6]

Brienne of Tarth recalls that Richard Farrow once played love songs on his lute outside her pavilion in his efforts to woo her.[7]

Horas Redwyne has taken up the lute, and plays often for Margaery Tyrell.[8]

Cersei Lannister interrogates the Blue Bard, hitting him in the face with his own lute.[9]