From A Wiki of Ice and Fire
Jump to: navigation, search
"Pod" redirects here. For the character known as "Lord Pea Pod", see Robin Peasebury.

Podrick Payne, frequently called Pod, is a squire from a cadet branch of House Payne,[4] and he is a distant cousin of Ser Ilyn Payne.[1] In the television adaptation Game of Thrones, Podrick is portrayed by Daniel Portman.

Podrick is a skinny boy with straight, thin hair[5] and a thin neck.[6]

Podrick was born a member of a lesser branch of House Payne. His father was a squire to richer cousins and his mother was a chandler's daughter. Podrick's father died in Greyjoy's Rebellion and his mother abandoned him when he was four years old and ran away with a wandering singer leaving him with one of the cousins his father had squired for. This cousin was Ser Cedric Payne who took care of him, although he might have treated the boy more like a servant than a relative.[9] Podrick had a good dog named Hero when he was young.[12]

When Lord Tywin Lannister calls his banners, Ser Cedric Payne brings Podrick along to tend his horse and clean his mail. Cedric dies in the fighting in the riverlands.[9]

Podrick, alone in the army, attaches himself to Ser Lorimer the Belly, a hedge knight who is part of Lord Leo Lefford's troops protecting the baggage train. Lorimer steals a ham from Lord Tywin's personal stores and is hanged for it, but Podrick, who had shared the ham, is spared due to his family's name. Ser Kevan Lannister takes charge of him.[9]

Podrick passes into the service of Tyrion Lannister as his squire after Tyrion joins the Lannister forces in the riverlands. He is so quiet that Tyrion on one occasion makes him stick his tongue out to confirm that he has not lost it, as his relative Ser Ilyn Payne did. Tyrion suspects that Podrick has been assigned to him as some cruel jape.[1]

Pod helps prepare Tyrion for the battle on the Green Fork.[1] The squire wakens Tyrion at the crossroads inn when the Lannisters are informed of the Battle of the Camps.[13] 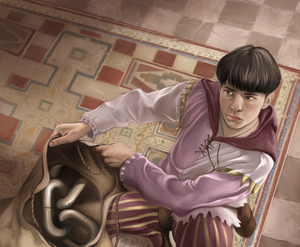 Upon their arrival in King's Landing, Tyrion sends Podrick to Ser Aron Santagar, master-at-arms of the Red Keep, for training. His instruction comes to an end when Aron perishes in the bread riots.[9]

Armed with a sword, Podrick insists upon accompanying Tyrion in the Battle of the Blackwater, joining Tyrion's several mounted sorties.[14][11] When Ser Mandon Moore of the Kingsguard tries to assassinate Tyrion, Pod pushes the knight into the waters of the Blackwater Rush, where Mandon drowns due to his heavy armor.[11] After the battle, Tyrion tells Podrick to keep secret his involvement in Mandon's death.[7]

Podrick remains loyal to Tyrion while the dwarf recuperates from his injuries, and the squire searches for a walking stick for Tyrion.[15]

Podrick is part of Tyrion's party that goes forth to meet the delegation from Dorne, and the squire carries the royal standard of King Joffrey I Baratheon. Tyrion tests his knowledge of heraldry by having him describe the banners of the Dornish nobles.[16]

After Tyrion marries Sansa Stark, the pair move into spacious apartments above the Kitchen Keep within the Red Keep. Podrick and Sansa's maids reside in small adjoining chambers.[17] Sansa is wary of Podrick at first, as he is a cousin to Ser Ilyn Payne. However, she soon comes to realize that Podrick is as frightened of her as she is of Ilyn. Whenever she speaks to him, he turns red. The girl sees a pimple by Podrick's nose.[8] The squire dresses in purple, white, and gold, the colors of House Payne, for the wedding of Joffrey and Margaery Tyrell.[8]

When Tyrion is imprisoned in a tower cell after being arrested for the murder of King at his wedding feast, Ser Kevan Lannister allows Podrick to serve Tyrion. Podrick brings Bronn to see the prisoner.[18] Tyrion is condemned to death after Ser Gregor Clegane kills Tyrion's champion, Prince Oberyn Martell, in trial by combat.[19] Ser Jaime Lannister and Varys help Tyrion escape, however, and Tyrion kills his father, Lord Tywin Lannister, before disappearing from the Red Keep.[20] 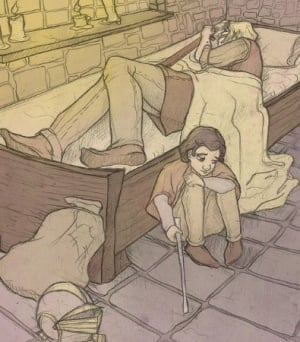 Podrick and Brienne of Tarth during their search for Sansa Stark, by mustamirri ©

Podrick talks with Brella, Sansa Stark's former maid, who tells him that Brienne of Tarth has visited her and that she is searching for Sansa. This prompts Podrick's wish to find Brienne, as he hopes that her finding Sansa will lead him to the missing Tyrion. He starts to follow Brienne who is on her way towards Duskendale.[5] Brienne notices a stye beneath one of his eyes.[5]

Brienne first notices Podrick from a distance in Rosby, riding on his horse,[21] then again outside of Duskendale, later bumping into him on a street of the town, knocking him over. She remembers seeing him earlier and his behavior seems suspicious. She notices him again at the Hollard castle on the road to Maidenpool and realizes that he has been stalking her at least since Rosby. She confronts him and learns his intention.[5] Brienne agrees to bring Podrick with her and along the way helps him to improve his swordsmanship.[9]

Brienne hires Dick Crabb to guide her and Podrick from Maidenpool to the Whispers, where Dick had sent a fool; Brienne hopes it is Sansa's onetime companion, Ser Dontos Hollard. Distrusting Dick, Brienne tasks Pod with staying on guard when she sleeps. Dick entertains the travelers by telling stories of Crackclaw Point, including squishers. The boy is wary of Crackclaw's woods.[2]

When they arrives at the Whispers, Brienne has Podrick stay back to guard their horses. Instead of Dontos, the fool turns out to be the outlaw Shagwell, who is with Pyg and Timeon; the three are former members of the Brave Companions. After Shagwell kills Dick, Brienne slays Pyg and Timeon. Pod throws stones at Shagwell, who falls to the ground and yields to Brienne. Shagwell is forced to dig a grave for Dick, but the fool then tries to kill Brienne. Podrick warns his companion, however, and she kills the fool.[2]

Joined by Ser Hyle Hunt, Brienne and Pod return to Maidenpool, where Brienne buys an orange from Seastrider for the boy. They travel with Septon Meribald, who tells Podrick about the Faith of the Seven, the silent sisters, and the Quiet Isle.[12][22] Podrick wants to stay with Brienne when they visit the Quiet Isle, but Brother Narbert insists that the boy share a cell with Hyle.[22]

At the inn at the crossroads, Brienne battles other remnants of the Brave Companions led by Rorge, and Gendry saves her from Biter.[23] Brienne, Podrick, and Hyle are taken captive by the brotherhood without banners after Lem's party returns to the inn. Podrick tells their captors that he has fought in battles and has killed.[6]

When brought before Lady Stoneheart, Brienne is given the choice between killing Ser Jaime Lannister, or dying herself by noose, a choice formulated as "the sword or the noose". When Brienne refuses to kill Jaime, she is sentenced to die. Podrick and Hyle are judged guilty for being allied with House Lannister as well, and are sentenced to die alongside Brienne. However, when the brotherhood begins to hang them, Brienne screams a word while watching Pod choke.[6] According to a semi-canon source, she screams "sword" in an attempt to save Podrick from the noose.[6][24]

While preparing for the second siege of Meereen, Tyrion Lannister recalls that Podrick had been sleeping before the battle on the Green Fork.[25]

Sansa: Are purple, gold, and white the colors of House Payne, Podrick?


Podrick: No. I mean, yes. The colors. Our arms are purple and white chequy, my lady. With gold coins. In the checks. Purple and white. Both.


Tyrion: There's a tale behind those coins. No doubt Pod will confide it to your toes one day.[8]
—Sansa Stark, Podrick, and Tyrion Lannister

Brienne: This road is too dangerous for a boy alone.


Podrick: Not for a squire. I'm his squire. The Hand's squire.
Brienne: Lord Tywin?
Podrick: No. Not that Hand. The one before. His son. I fought with him in the battle. I shouted 'Halfman! Halfman!'
Brienne: Why are you stalking after me? What do you want?


Podrick: To find her. His lady. You're looking for her. Brella told me. She's his wife. Not Brella, Lady Sansa. So I thought, if you found her ... I'm his squire, but he left me.[5]
—Brienne Tarth and Podrick

Brienne: You may call yourself a squire, but I've seen pages half your age who could have beat you bloody. If you stay with me, you'll go to sleep with blisters on your hands and bruises on your arms most every night, and you'll be so stiff and sore you'll hardly sleep. You don't want that.
Podrick: I do. I want that. The bruises and the blisters. I mean, I don't, but I do. Ser. My lady.[9]


Podrick: If they try, I'll kill them.

Podrick Payne was so shy he was furtive. Tyrion had never quite gotten over the suspicion that his father had inflicted the boy on him as a joke.[4]

It was Pod on the bridge of boats, the lad saved my life.[7]

You've been a good squire to me. Better than I deserved. Whatever happens, I thank you for your leal service.[19]

The boy may be a stumbletongue, but he’s not stupid.[9]

Not the quickest lad I've ever known, but a decent squire in the end. I hope he found a better man to serve.[25]