Having learned that the bulk of the Watch's fighting force has been wiped out in the fight at the Fist by the Others, Mance Rayder plans to weaken the strength of the brothers of the Night's Watch who still remain at the Wall. He sends out several smaller raiding parties to confuse the black brothers. When Mance's diversionary force strikes hard in the west, Lord Steward Bowen Marsh marshals his forces and takes the bait, taking the remaining fighting men with him, leaving only the old, the green, and the sickly behind to defend Castle Black. Bowen leaves the infirm Ser Wynton Stout as castellan, although the blacksmith Donal Noye takes de facto leadership due to Stout's senility.[1]

As part of Mance's plan, a group of raiders under the command of Styr, the Magnar of Thenn, and Jarl scale the Wall and travel through the Gift, planning on attacking the weakly defended Castle Black from the south.

Under the command of Styr, the Magnar of Thenn, and Jarl a force of a hundred Thenns and twenty of Jarl's raiders climb the Wall near Greyguard.[2] Jarl and three more climbers hit a patch of bad ice at a height of six hundred feet and fall to their deaths,[3] while two Thenns die while climbing the ladders later. Near midnight the others reach the top of the Wall.[3]

Styr leads his warriors off the Wall at Greyguard, an abandoned castle of the Night's Watch where the presence of huge stone steps improve the descent. From there, the group goes deeply into the Gift.[4] At Queenscrown, Jon Snow, who had joined the wildlings pretending to have abandoned the Night’s Watch, escapes the raiding party and travels back to Castle Black by the way of Mole's Town in time to warn the remaining brothers of the Night's Watch of the on-coming attack from the south.[4][1] Many residents of Mole's Town flee to the castle. Under the command of Donal Noye Castle Black organizes the defense of Castle Black.[5]

The battle starts at night when Thenn warriors reach Castle Black. The battle is a near thing, and the Night’s Watch is forced to use a trap: they set the lower portion of the great wooden stairs, soaked in oil, ablaze. The stair is destroyed and the fire melts parts of the Wall, which fall down upon Styr and his men, killing them.[5]

Battle beneath the Wall

Main article: Battle beneath the Wall

Mance assembles his host beyond the tree line across from the gate at Castle Black and starts his assaults. The Night's Watch withstands numerous attacks on their gate, including one led by giants mounted on mammoths, bringing a ram,[2] and one where the wildlings deploy a turtle.[6] Shortly after the Night’s Watch destroys the turtle, Ser Alliser Thorne arrives with Lord Janos Slynt and some reinforcements from Eastwatch-by-the-Sea. They take Jon into custody, having learned from a captured Rattleshirt that Jon has killed Qhorin Halfhand. Janos has Jon imprisoned in the ice cells under the Wall,[6] but is unable to execute him when Maester Aemon continues to insist on Jon’s loyalty. Thorne and Slynt eventually sent Jon as an envoy to the wildling camp to treat with Mance, with the secret mission of assassinating Mance.[7]

While Jon is at Mance’s camp, rangers from Eastwatch, led by Cotter Pyke, and the southern host of King Stannis Baratheon arrive, taking Mance Rayder's host in the flank. The wildling host gives battle, but after Mance’s horse is killed and falls, they break and run.[7] In the battle that follows, most of Mance’s lieutenants are captured or killed, with the exception of Tormund and Varamyr. A thousand wildlings are killed, and another thousand are taken captive.[8] 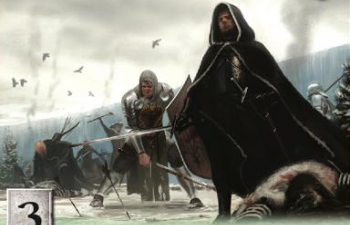 The brothers of the Night’s Watch start the election of their new Lord Commander. It takes them ten days. Meanwhile, Stannis Baratheon decides to remain at Castle Black, where he occupies the King's Tower.[9] Though he plans to burn Mance Rayder, he is willing to allow the other free folk through the Wall and settle them on the Gift if they swear to R'hllor, including the Lord of Bones and Sigorn, the new Magnar of Thenn.[8] He offers to legitimize Jon Snow and name him Lord of Winterfell in exchange for Jon's help in winning the north to his side. He additionally plans to wed Val to his new Lord of Winterfell in order to assure the loyalty of his new subjects. Jon is given time to think about the offer,[8] but eventually decides to decline it after having been reunited with his direwolf, Ghost.[10] That same day, the tenth day of the elections, Stannis threatens the candidates to reach a decision that day, or he will do it for them. Realizing that all candidates are losing votes with the exception of Janos Slynt, Samwell Tarly suggests to the two other main candidates, Ser Denys Mallister and Cotter Pyke, that they give their support to a new candidate instead, suggesting Jon Snow.[11] That night, Jon Snow is elected the 998th Lord Commander of the Night's Watch.[10]

The wildlings who have escaped capture have fled into the haunted forest.[12] Many follow a rider who leads them to the Milkwater, while hundreds more follow a dour warrior to Thenn.[12] Even more follow Mother Mole to Hardhome; Varamyr Sixskins believes the number to have been hundreds,[12] but Bowen Marsh later reports that more than six thousand wildlings are at Hardhome with Mother Mole.[13] Another three thousand follow Tormund.[13][14]