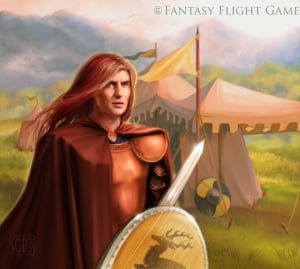 Bryce Caron, Lord of the Marches, by Quickreaver ©

Marcher lords[1] or marcher lords[2] are lords of the stormlands and the Reach who live within the Dornish Marches.

The Marcher lords have proudly defended the realms of the Storm Kings and Kings of the Reach against incursions from Dorne.[3][4] Many ballads and tales praise the valor and skill at arms of the Marcher lords and their longbowmen.[4]

House Caron uses the title Lord of the Marches, although they do not hold dominion over the other marcher houses of the stormlands. The Carons and the Swanns both claim to be the oldest of the marcher lords.[4]

In 10 AC during the First Dornish War, Lord Fowler surprised the unsuspecting marcher lords by quickly raiding the Reach and capturing Nightsong. Ser Addam Hightower responded by marching from Oldtown to retake Nightsong, but while he was gone Ser Joffrey Dayne burned the environs of Oldtown. The Fowlers had meanwhile burned Nightsong and fled into the Red Mountains with captive Carons. Addam returned to Oldtown to confront Joffrey, but the Daynes had by then also fled back to the mountains of Dorne.[6]

After ascending the Iron Throne in 37 AC, King Aenys I Targaryen visited the marcher lords in their castles during his journey to Oldtown. When Dornishmen began raiding the Marches in the Second Dornish War, Orys Baratheon, Lord Paramount of the Stormlands, responded by smashing Lord Walter Wyl at Stonehelm. Nightsong resisted a siege by the Vulture King, and the bandit leader's host was then destroyed by Lady Ellyn Caron, Lord Harmon Dondarrion, and Lord Samwell Tarly in the Vulture Hunt.[7]

Lords Dondarrion, Selmy, and Tarly represented the Dornish Marches at the Golden Wedding in 49 AC.[8] King Jaehaerys I Targaryen visited Horn Hill, Nightsong, and Blackhaven in 54 AC after the elevation of Alfyn to High Septon.[9] In 61 AC during the Third Dornish War, Lord Simon Dondarrion led a small force of marcher knights into the western Red Mountains against a second Vulture King, and Jaehaerys and Lord Rogar Baratheon pursued the outlaws from the east.[10]

Marcher lords attended the Great Council of 101 AC at Harrenhal.[11]

King Maekar I Targaryen was slain fighting a rebellious lord on the Dornish Marches[12] during the Peake Uprising.[13] Tyrion Lannister, acting Hand of the King, arranges a betrothal between his niece, Princess Myrcella Baratheon, and Prince Trystane Martell during the War of the Five Kings. Trystane's father Doran, Prince of Dorne, fortifies the high passes of the Red Mountains to prevent the Marcher lords from aiding King Stannis Baratheon.[14][15]

Angry at the death of her father, Oberyn Martell, Obara Sand wants to lead an army from the Prince's Pass against the marcher lords and then Oldtown.[2]

The Marcher lords are duly proud of their history as key defenders of the realm of the Storm Kings, and many are the ballads and tales of their valor.[4]

Tyrion: Any chance we might convince the Dornishmen to descend on the Marches?


Tyrion: A pity. Well, the threat may serve to keep the Marcher lords close to their castles, at least.[14]
—Tyrion Lannister and Varys