The Great Council of 101, as depicted by Marc Simonetti in The World of Ice & Fire.

A Great Council[1] or great council[2] is a council of Westerosi nobles gathered to resolve contentious issues. In Westerosi history, there have been at least two Great Councils to decide the succession to the Iron Throne, while a third decided the regents of an under-aged king.

The kingsmoot was a similar ceremony held amongst the ironborn, where all longship captains were allowed to cast a vote as to who should be chosen as the new rock king, salt king, or High King of the Iron Islands.[3][4]

King Aenys I Targaryen considered calling a great council in 37 AC, when four rebels—Harren the Red, Jonos Arryn, Lodos the Twice-Drowned, and the Vulture King—began to harass the Seven Kingdoms and the king could not decide how to handle them. During this proposed gathering, the assembled nobles would have discussed how best to deal with the situations. A council was never called, however, as others acted more swiftly than the king, thereby solving the troubles.[5][2]

The Great Council of 101 AC (also known as the Great Council of Harrenhal) was convened by old King Jaehaerys I Targaryen after the unexpected death of his son and heir Baelon Targaryen, so that the lords of the Seven Kingdoms could settle on who should succeed him on the Iron Throne.

During the Dance of the Dragons, the Iron Throne was contested by Queen Rhaenyra Targaryen and King Aegon II Targaryen. After the fall of King's Landing in 130 AC, Dowager Queen Alicent Hightower suggested assembling a great council to decide which claimant should ascend to the throne. Rhaenyra, however, refused to grant the wish.[6]

King Aegon III Targaryen ascended the throne in 131 AC at the age of eleven at the conclusion of the Dance of the Dragons. It would be five years before the king would be able to rule in his own right, but instead of naming one regent, a council of seven regents was named to rule with the Hand of the King.[7]

In the aftermath of the Lysene Spring, a gathering of the lords to King's Landing was called in 136 AC to name new members after deaths and resignations. Although not formally called a Great Council according to Gyldayn,[8] Yandel considers it as such.[7] This was the largest gathering of nobles since the Great Council of 101 AC. Most attendees originated from the crownlands, riverlands, stormlands, and the Vale of Arryn, while others included Lannister envoys from the westerlands, Lord Torrhen Manderly, Lord Lyonel Hightower with Lady Samantha Tarly, and a large contingent with Lord Unwin Peake.[8]

The gathering selected Willam Stackspear, Marq Merryweather and Lorent Grandison by lot,[7] while Lord Manderly was chosen as Hand of the King. King Aegon III dismissed the regents and Hand once he reached his sixteen nameday.[7][8]

King Daeron II Targaryen's heir, Prince Baelor, died after a trial of seven in 209 AC,[9] making his eldest son Valarr the heir. However, later that year the Great Spring Sickness killed King Daeron and both of Baelor's sons, Valarr and Matarys.[10][11] This in turn left Daeron's second son, Prince Aerys, to inherit, and he was thus crowned as King Aerys I Targaryen.[10] Aerys left no issue, and upon his death in 221 AC the crown was passed to his youngest brother, who reigned as King Maekar I Targaryen (Aerys's other heirs, Prince Rhaegel and Rhaegel's son, Prince Aelor, had predeceased Aerys). The inheritance was unclear after Maekar's death in the Peake Uprising of 233 AC, so a council was called in King's Landing by Maekar's Hand of the King, Lord Brynden Rivers, to decide who would inherit the Iron Throne.[12]

Maekar's eldest son, Prince Daeron, called "Daeron the Drunken", had died of a sexually transmitted pox prior to 233 AC. Daeron's only issue was Princess Vaella, a feeble-witted, simple girl.[12][13]

Maekar's next son, Prince Aerion, had died in 232 AC, when he drank wildfire in the mistaken belief it would turn him into a dragon.[12][13] Aerion's only issue was an infant son, Prince Maegor, who had been born 232 AC, not long before Aerion's death.[12]

Maekar's youngest son, Prince Aegon Targaryen, had served as a squire of Ser Duncan the Tall in his youth, which had led to some of the lords mistrusting him, as they felt that Aegon's wandering with the hedge knight had left the prince "half a peasant".[12]

The claim of Princess Vaella was immediately dismissed. Only a few spoke up for the claim of Prince Maegor, but his ascension would mean a long regency, and in addition, it was feared that Maegor might have inherited Aerion's madness and cruelty. Thus, Maegor's claim was dismissed as well.

Prince Aegon's claim seemed as the obvious choice, but due to the prince's wanderings in his youth, there were enough lords who hated him, and thus, an effort was made to offer the throne,[12] quietly, to Aemon. Maester Aemon, however, refused the crown.[13]

As the Great Council was debating the matter of succession, a fifth claimant appeared. Aenys Blackfyre, the fifth son of the Pretender Daemon I Blackfyre, had written to King's Landing from Tyrosh when the Great Council had first been announced, hoping to gain the throne with words, as swords had failed his family three times already. The Hand of the King, Lord Brynden Rivers, had offered him safe conduct to Westeros. Upon arrival, however, Aenys was immediately arrested and dragged to the Red Keep, where he was executed. His head was presented to the council to serve as a warning against every lord who might still have sympathies for House Blackfyre.[12]

A majority of the council elected Prince Aegon soon thereafter, leading to the ascension of King Aegon V Targaryen, called "Aegon the Unlikely".[12]

As his first act as King, Aegon V had Brynden Rivers arrested and sentenced to death for breaking the word of the Iron Throne, having arranged the execution of Aenys Blackfyre. Aegon later offered Bloodraven the option of going to the Wall, which Brynden accepted. He traveled to the Wall together with Maester Aemon, serving in the Night's Watch from 233 AC until he disappeared beyond the Wall in 252 AC.[14] 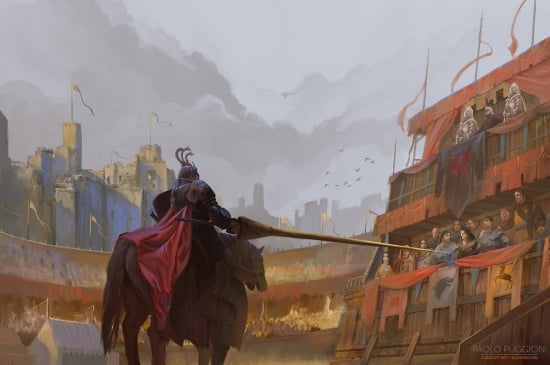 The announcement of the tourney at Harrenhal by Lord Walter Whent gave reason for suspicion. It was rumored that there had been a "shadow host", who had been providing Walter with the funds to pay the magnificent prizes which were promised. These rumors were widely believed in 281 AC, and are still believed at the present. Whilst a dozen names have been put forward for the identity of this shadow host, Prince Rhaegar Targaryen is the most compelling.[15]

Rhaegar allegedly arranged the tourney by sending Ser Oswell Whent, his friend, and Lord Walter's brother, as a go-between. Providing the gold for prizes, the prince wanted to lure as many lords and knights as possible to Harrenhal to call an informal Great Council. Hoping to address the madness of his father, King Aerys II Targaryen, Rhaegar possibly desired a regency or a forced abdication.[15]

Aerys, warned of these rumors by his master of whisperers, Lord Varys, decided to attend the tourney personally, despite not having left the Red Keep for four years.[15]

Before departing King's Landing during Robert's Rebellion, Prince Rhaegar Targaryen told Ser Jaime Lannister that he intended to call a council to determine what should be done about King Aerys II Targaryen.[16] Rhaegar was slain by Lord Robert Baratheon at the Battle of the Trident, however.[17]

After realizing that King Joffrey I Baratheon is not the biological son of the late King Robert I Baratheon, Catelyn Stark suggests to Renly Baratheon that he, his brother Stannis, and Robb Stark, who have all been crowned during the War of the Five Kings, should set aside their claims and call for a Great Council to determine who should rule. Renly laughs at the suggestion, however.[18]

A kingsmoot is called in late 299 AC by Aeron Greyjoy, a priest of the Drowned God, after the death of Balon Greyjoy, King of the Isles and the North.[3] In early 300 AC, Euron Greyjoy is chosen as the new king by the ironborn assembled at Old Wyk.[19]

Alicent: Let us together summon a great council, as the Old King did in days of old, and lay the matter of succession before the lords of the realm.
Rhaenyra: Do you mistake me for Mushroom? We both know how this council would rule.[6]

Catelyn: Let the three of you call for a Great Council, such as the realm has not seen for a hundred years. We will send to Winterfell, so Bran may tell his tale and all men may know the Lannisters for the true usurpers. Let the assembled lords of the Seven Kingdoms choose who shall rule them.
Renly: Tell me, my lady, do direwolves vote on who should lead the pack? The time for talk is done. Now we see who is stronger.[18]