House Heddle is a family from the riverlands that has had at least two members who where knights.[1] Its known current members own the inn at the crossroads, and other than their surname are now apparently no different from smallfolk.

Ser Jon Heddle, known as Long Jon, was a knight in the 1st century AC. When he was crippled and done with adventuring, he took over the old inn at the crossroads between the Kingsroad, the river road, and the high road. Jon took to ironworking as well, creating a sign for his inn in the shape of a three-headed dragon. The iron sign would clank in the wind and gave the inn its new name, the Clanking Dragon.[1]

Many years later in 196 AC, when Long Jon's son was an old man, the First Blackfyre Rebellion broke out. Lord Darry, then overlord of the inn's lands, was a famous Targaryen supporter. He saw the inn's black iron dragon sign and became angry because it resembled the coat of arms of the rebels, House Blackfyre; he cut it down, hacked it to pieces, and threw it into the river. Eventually one of the iron dragon's heads washed up on the Quiet Isle, red with rust.[1]

Some years later, a descendant of Long Jon, Ser Tommard Heddle, sought the hand of Lord Ambrose Butterwell's daughter, killing three of her other suitors. The two were married and Black Tom Heddle became a sword of House Butterwell's household and commander of the garrison at Whitewalls. In 212 AC, Lord Butterwell and Black Tom became involved with the Second Blackfyre Rebellion. When Black Tom attempted to capture or kill Egg, the disguised prince and squire to Ser Duncan the Tall, he was challenged and killed by Dunk. The rebellion was put down within the day.[2]

Over time, the Heddles' inn became known as the River Inn, where one could take a ferry across to Lord Harroway's Town and Whitewalls. However, the river moved and soon that name faded. Masha Heddle's grandfather was the innkeeper at the time the river moved, c.220 AC-230 AC.[1]

When Catelyn Tully was a child, Masha was kind to her, and gave her and other children sweet cakes.[3] 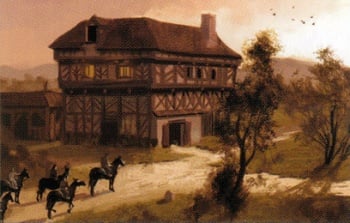 The Heddles' inn, at the crossroads.

Lady Catelyn Stark and Ser Rodrik Cassel stay at the inn at the crossroads while returning to the north from King's Landing. There they encounter Tyrion Lannister, whom they arrest and take with them when they leave. Masha Heddle begs the nobles to take their fight elsewhere, but is refused.[3]

Later, Lord Tywin Lannister takes revenge on Masha, hanging her on a gibbet in the yard of the inn. He takes the inn as his quarters while he is encamped at the crossroads. Tyrion sees Masha's body when he meets his father at the inn, after leaving the Eyrie with his clansmen.[4]

After Masha's death, her nephew reopens the inn, bringing in whores to attract customers.[1] Visiting the inn for wine and information, Sandor Clegane and Arya Stark happen upon three of Ser Gregor Clegane's men. The innkeep, his girls, and his patrons vacate the common room after Sandor states his expectation the Mountain's men will torture the innkeep for his gold. Sandor and Arya kill Polliver, the Tickler, and a pimply squire, but Sandor is badly wounded in the mêlée.[5]

Masha's nephew is eventually killed at the hands of an unidentified noble and the inn is left vacant. The sisters Long Jeyne and Willow Heddle reopen the inn for business and it serves as a refuge for orphan children. According to the Elder Brother the girls are Masha's nieces,[1] while a semi-canon source states they are the daughters of Masha's late nephew.[6] The Heddles and the inn are now connected with the brotherhood without banners; in addition, Gendry now works for them as a smith.[1]

In 300 AC, Brienne of Tarth, Podrick Payne, Septon Meribald, and Ser Hyle Hunt travel to the crossroads inn. Meribald tells his companions the history of the inn and the Heddle family. The group passes hanged men in the vicinity, alleged perpetrators of the raid on Saltpans, which leads Hyle to say the inn should now be called the "Gallows Inn".[1]

Brienne and her companions are greeted at the inn by Willow, Gendry, and the orphans. Jeyne is away with the brotherhood, but Meribald trades his food for rooms at the inn. A fight ensues when outlaws from the Brave Companions arrive and threaten Willow and the children. Brienne defends them and Gendry joins in the fight; Rorge and Biter are slain, but Brienne is badly wounded.[1] Jeyne tends to Brienne's wounds after the battle, but Brienne, Hyle and Podrick are all given over to Lady Stoneheart.[7]

House Heddle at the end of the third century

The known Heddles during the timespan of the events described in A Song of Ice and Fire are: