King of the Reach

From A Wiki of Ice and Fire
(Redirected from Kings of the Reach)
Jump to: navigation, search 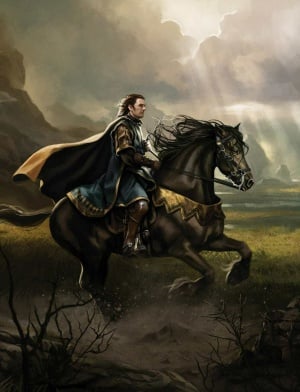 Garth the Goldenhand, greatest of the Kings of the Reach.

King of the Reach, or in at least one instance, Queen of the Reach, was the title of the ruler of the Kingdom of the Reach, also known as the Green Realm,[1] from Garth the Gardener to Mern IX. The Kings of the Reach were members of House Gardener, and their consorts were known as Queens of All the Reach.[2] The land of the Reach is now part of the Seven Kingdoms ruled from the Iron Throne.

The mythical Garth Greenhand is said to have been the High King who lead the First Men across the Arm of Dorne. His firstborn son was Garth the Gardener, the legendary first King of the Reach.[1] The kings from House Gardener initially ruled the Reach proper, focused on Highgarden and the Mander,[3] but over time they used their claim of descending from Garth the Gardener to claim supremacy over neighboring kings and lords.[4]

King Garth the Great allied with Old Oak, Red Lake, and Goldengrove, expanding the kingdom's borders north. The kingdom of the Reach expanded southward with the addition of the Arbor during the reign of King Meryn III, and soon after Garland the Bridegroom arranged marriages with Oldtown to join their realms. King Garth the Goldenhand conquered the Misty Islands from the ironborn, fortifying them as the Shield Islands.[4] The Kings of the Reach also acquired the western marches near Horn Hill.[3]

The kings and at least one queen ruled from the Oakenseat in Highgarden until the throne's destruction during the reign of Garth X.[5] The Gardeners often warred with the Kings of the Rock from House Lannister, the Storm Kings from House Durrandon, river kings from the Trident, ironborn kings from the Iron Islands, and Dornishmen.

The Gardeners initially fortified their kingdom during the coming of the Andals to Westeros, but they eventually welcomed the newcomers to their realm. House Tyrell, a house of Andal origin, became the stewards of the Kings of the Reach.[5]

The Gardeners ruled as kings until Mern IX rode out to meet Aegon the Conqueror and his sister, Visenya and Rhaenys Targaryen, during Aegon's Conquest, and the Gardeners met their destruction upon the Field of Fire.[6] House Tyrell has since ruled from Highgarden as Lords Paramount of the Reach for the Iron Throne.[7]

The Kingdom of the Reach had its own local coinage before the Conquest, with gold coins that featured the hand-shaped sigil of House Gardener on one side and the face of a king on the other - for this they were called "hands". Gold hands were smaller and thinner than gold dragons, roughly half their weight and value.[8][9]

Known Kings of the Reach

No precise lineage or chronology of House Gardener is known, but the individuals listed below are believed to be in rough chronological order.