House Stokeworth of Stokeworth is a noble house from the crownlands. Sworn directly to King's Landing, they live at nearby Castle Stokeworth north of the capital.[2]

They blazon their arms with a white lamb holding a golden goblet on a green field.[1][4] Their motto is "Proud to be Faithful".[1][5]

Lord Alyn Stokeworth was named Hand of the King to Aegon I Targaryen in 34 AC. When King Aegon I Targaryen ordered the Aegonfort torn down and the Red Keep built in its place in 35 AC, he assigned the task to Lord Alyn and Queen Visenya Targaryen.[7] Alyn continued to serve as Hand for King Aenys I Targaryen, and led a force into the riverlands to hunt down Harren the Red, but he was slain by the rebel. Alyn was avenged by his squire, Bernarr Brune.[7][8]

Alyn's daughter, Samantha Stokeworth, was a constant companion of Princess Rhaena Targaryen,[7] and she attended Rhaena's wedding to Androw Farman at Fair Isle in 49 AC.[12] In 54 AC, Sam was among the women poisoned at Dragonstone by a jealous Androw.[11]

When the Dance of the Dragons begun, Lord Stokeworth was among the black lords at court imprisoned for being loyal to Princess Rhaenyra Targaryen instead of her rival, Aegon II Targaryen. When brought before the King's Justice, however, Lord Stokeworth was one of the few lords to swear fealty to Aegon. Ser Criston Cole later marched on Castle Stokeworth demanding the Stokeworths to add their strength to his own as a proof of loyalty.[13] After the fall of King's Landing to Rhaenyra, Lord Stokeworth attempted to swear her fealty again, but Rhaenyra had him beheaded for his disloyalty. Prince Daemon Targaryen suggested having Lord Stokeworth's young daughter inherit over his younger son, even proposing to marry her to Ulf White to award his loyalty. However, taking Lord Corlys Velaryon's counsel, Rhaenyra allowed Lord Stokeworth's son to inherit.[14] When Rhaenyra fled the capital after the Storming of the Dragonpit, young Lord Stokeworth's castellan granted her hospitality for the night.[15] When Aegon II retook the Iron Throne, he had young Lord Stokeworth brought to him in chains and demanded obeisance, only freeing him after taking hostages and a ransom. Levies from Stokeworth, Rosby, and Hayford abandoned Lord Borros Baratheon during the Battle of the Kingsroad.[16] The Stokeworths declared for Aegon III Targaryen soon after.[17] 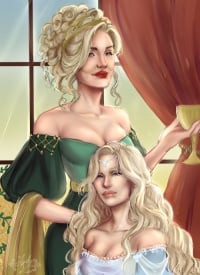 At the age of eight, Lady Falena Stokeworth was considered a potential match for Aegon III following the death of Queen Jaehaera Targaryen. Before the Maiden's Day Cattle Show, however, Falena fell down the stairs and broke her leg.[18] In 149 AC, Falena became the first mistress of Prince Aegon Targaryen. When she was found abed together with Prince Aegon two years later, she was wed to Ser Lucas Lothston, who was subsequently named as the new Lord of Harrenhal. Prince Aegon paid frequent visits to Harrenhal for the two years that followed.[19]

After the death of King Baelor I Targaryen in 171 AC, Lady Maia Stokeworth suggested that his uncle, King Viserys II Targaryen, had poisoned Baelor the Blessed to gain the throne.[20]

In 193 AC, Lord Stokeworth was overthrown in a melee at King's Landing by Ser Arlan of Pennytree.[21] In 209 AC, Ser Samwell Stokeworth participated in the tourney at Ashford Meadow.[22] When Lord Brynden Rivers marched on Whitewalls to quash the Second Blackfyre Rebellion, House Stokeworth marched with him in support.[23]

Manly Stokeworth was a Commander of the City Watch of King's Landing. Upon his death Janos Slynt was made the new commander.[24]

Lord Petyr Baelish, known as Littlefinger, is often invited to dine with Lady Tanda Stokeworth and her daughters. Littlefinger thinks she hopes to marry him to Lollys Stokeworth.[25] Tanda is considered by Littlefinger as a possible ally for him and Lord Eddard Stark to depose the Lannisters from power, just after King Robert Baratheon's death.[26]

From the time Tyrion Lannister arrives at King's Landing, Lady Tanda invites him to several banquets, hoping to arrange a marriage with Lollys.[27][2] During the riot of King's Landing the day Myrcella Baratheon departs to Dorne, Lollys is knocked from her saddle and left behind. She is found walking naked after being raped by half a hundred men, who have left her pregnant.[28]

Falyse Stokeworth arrives the day before the Battle of the Blackwater with a small troop of men from Castle Stokeworth. The Stokeworths spend the battle holed up in Maegor's Holdfast.[29]

Lady Tanda offers Lollys to Lord Tywin Lannister as a possible wife for Tyrion.[30] Tanda gave a pair of leather boots to King Joffrey I Baratheon as a wedding present. Tanda flees from the Red Keep when Joffrey chokes to death at his wedding feast.[31][32]

After being knighted, Ser Bronn of the Blackwater accepts to wed Lollys.[33]

After Falyse is denied by Cersei Lannister to name Lollys' son Tywin,[34] Bronn decided to name him Tyrion in a move that is considered by many a defiance of the Lannisters. Should Lord Gyles Rosby die, according to Falyse, Rosby would come to Stokeworth, since Lady Tanda was an aunt to Lord Gyles's second wife and is a third cousin herself.[1]

Lady Tanda's hip is shattered from a fall off her horse. Fearing Bronn to be secretly supporting her brother Tyrion, Cersei enlists the help of Falyse and her husband Ser Balman Byrch in eliminating Bronn.[1] However, the plan goes awry; Bronn unchivalrously kills Ser Balman and orders Falyse to leave the castle. She flees back to Cersei begging for men to retake Stokeworth from Bronn, who styles himself as "Lord Stokeworth". Cersei refuses Falyse and instead gives her to Qyburn for use in his experiments, fearing that the failure of the plot would undermine her position.[35] When Lady Tanda dies of a chill, Lollys succeeds Tanda and Falyse as Lady of Stokeworth, with Bronn as her lord.[36]

Lady Falyse has died screaming in the black cells, a victim of Qyburn's experiments.[3]

House Stokeworth at the end of the third century

The known Stokeworths during the timespan of the events described in A Song of Ice and Fire are:

Cersei: My friends ... you are my friends, I hope? And King Tommen's?
Balman: That sweet lad. Your Grace, the very words of House Stokeworth are Proud to Be Faithful.
Cersei: Would that there were more like you, good ser.[1]