From A Wiki of Ice and Fire
(Redirected from Red mountains)
Jump to: navigation, search

The Red Mountains[2][3] or red mountains[4][5] is a mountain range extending over much of southern Westeros. The range divides Dorne in the south from the stormlands and the Reach to the north.

Castles in the Dornish Red Mountains include Blackmont, High Hermitage, Kingsgrave, Skyreach, Starfall, Wyl, and Yronwood. The Dornish mountains also contain the ruins of the tower of joy and Vulture's Roost.[6] There are two principal passes through the mountains, the Prince's Pass, guarded by House Fowler, and the Boneway, guarded by House Yronwood. The river Wyl flows from the eastern mountains to the Sea of Dorne, while the Torentine flows from the western mountains to the Summer Sea.[6]

The hidden valleys and high meadows of the Red Mountains have sweet and green grass.[7] The meadows north of Yronwood, for instance, have crisp air at night.[8] The fertile vicinity of Yronwood is forested and contains iron, tin, and silver.[9] The foothills near Skyreach have runoff from the heights and plentiful game in valleys.[10]

The people of the southern Red Mountains are considered "stony Dornishmen" descending primarily from First Men and Andals.[7]

North and northeast of Dorne, the Red Mountains extend along the southern stormlands to Cape Wrath, Griffin's Roost on Shipbreaker Bay, and almost to Storm's End.[6] This includes the southern Dornish Marches and the castles of the marcher lords, such as Blackhaven and Stonehelm.[6] The vicinity of Stonehelm is known as the Red Watch.[11]

Northwest of Dorne, the mountain range extends into the southern Reach. Horn Hill is located in the foothills[12] of the northwestern Red Mountains.[6]

According to some legends, Garth Greenhand is said to have led the First Men from Dorne through the Red Mountains to the Reach.[7] The rugged terrain kept many mountain communities isolated.[9] The most powerful dynasties which developed were the Kings of the Torrentine from House Dayne, the Kings of Stone and Sky from House Fowler, and the High Kings of Dorne from House Yronwood.[9]

King Albin Manwoody was a madman who claimed dominion over the Red Mountains, but he was defeated and sent to the Wall during Nymeria's War.[14]

During the conquest of Dorne, Lord Lyonel Tyrell led a host through the Prince's Pass and King Daeron I Targaryen traveled the Boneway.[18]

Lords Caron and Dondarrion burned a Vulture King out of the Red Mountains.[3] Gerris Drinkwater once led Quentyn Martell and other friends to find the lair of one of the Vulture Kings.[8] 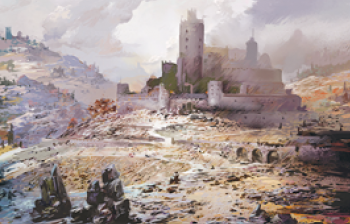 Tyrion Lannister requests Doran Martell, Prince of Dorne, send his armies to the Boneway and the Prince's Pass to keep the marcher lords in their castles as part of the political betrothal of Myrcella Baratheon and Trystane Martell.[19] Doran promises to move his banners into the high passes once Myrcella arrives safely at Sunspear.[20]

Two Dornish hosts have massed in the two passes through the Red Mountains. The hosts sit encamped, waiting for Doran to loose them on the enemies of House Martell.[21]

Dorne is sand and scorpions, and bleak red mountains baking in the sun.[22]