From A Wiki of Ice and Fire
Jump to: navigation, search
For the legendary Lord Commander of the Night's Watch, see Night's King.

Before he became a White Walker, the Night King was a First Man who was captured by Children of the Forest, Leaf among them. Leaf pressed a dragonglass dagger into his chest, causing his eyes to turn blue and turning him into the first of the White Walkers. The Children of the Forest created the White Walkers to defend themselves when Westeros was invaded by the First Men, who were cutting their sacred trees and slaughtering them.

The Night King appears in another of Bran's visions, where the boy sees him as a human being transformed into a White Walker by the Children of the Forest. 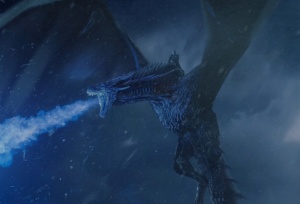 Bran using his gift to see through the eyes of ravens spots the Night King's army marching towards the Wall. The Night King looks up at the ravens, and Bran immediately loses his connection.

Meanwhile Jon Snow and his band go North of the Wall to capture a Wight as proof to the rest of the Seven Kingdoms of the threat approaching. They are later trapped and encircled by the Night King's army, Jon theorises that if they slay the Night King, it will collapse the rest of his undead horde.

Daenerys and her three dragons arrive to rescue Jon and the survivors. The Dragons lay waste to the Night King's army. One of the Night King's lieutenants hands his master a spear made of ice. The Night King targets the Dragon Viserion who is in flight and laying waste to his forces with his flaming breath.

The Night King throws the spear like a javelin. The enchanted weapon sails through the air and impales the White Dragon causing him to crash into the ice of the lake, where he dies before sinking. The Night King is handed a second spear and attempts to take down Drogon as he takes off and flees, but the Dragon dodges the projectile.

The Night King's forces later use chains taken from Hardhome to pull Viserion's corpse from the lake. The Night King then places his hand on the dead dragon's head and his eyes open, now bright blue.

The Night King rides Viserion when the White Walkers advance on Winterfell. Bran skinchanges into ravens in order to track down the Night King, who orders the wights to move forth on the trenches of Winterfell that have been lit ablaze by Melisandre's magic. He then engages in an aerial duel with Daenerys Targaryen atop Drogon, and Jon Snow atop Rhaegal, pursuing Daenerys with Viserion's flame. The Night King manages to blast a hole in Winterfell's walls, but is stopped by Jon, who has Rhaegal fight the undead Viserion. Daenerys then flies Drogon into Viserion, and the Night King falls from his mount, landing hundreds of feet below. When Daenerys spots him, she commands Drogon to blast the Night King with dragonflame, but when the fires clear, the Night King emerges unscathed. He hurls an ice spear at Drogon, but Daenerys evades the attack.