From A Wiki of Ice and Fire
(Redirected from Mountain clans of the Vale)
Jump to: navigation, search 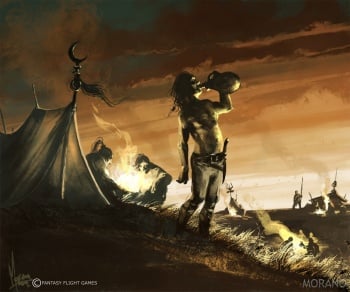 Tribes of the Vale, by Tomasz Jedruszek © Fantasy Flight Games

The mountain clans or hill tribes[1] are a culture, divided into clans of varying size and strength, who live in the foothills of the Mountains of the Moon, in the Vale of Arryn. Descendents of the First Men,[2] they are considered primitive by lowlanders.[3]

The Vale's clans are sometimes called wildlings,[3][4] like the free folk who live beyond the Wall. They should not be confused with the northern mountain clans, who are more respected and whose clan chiefs are sometimes regarded as petty lords.[5] 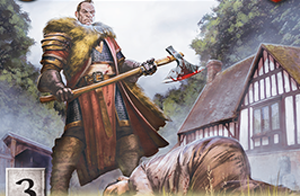 The Mountains of the Moon are home to a population of people who have rejected the authority of the Eyrie and are independent from the rest of the Seven Kingdoms and its feudal society. The clansmen are an egalitarian society, believing that every person's voice, regardless of gender, should be heard during councils.[6] Clansmen are fiercely loyal to each other, while some clans share close bonds.[3] Conflicts between the clans are often resolved by payment of blood money and clansmen are quick to settle personal grievances through violence.[3] Archmaester Gyldayn considered the clansmen to be savages.[7]

Clansmen identify themselves with a first name and the name of their father; examples include Conn son of Coratt and Chella daughter of Cheyk.[6]

The clansmen live short and savage lives as bandits and outlaws.[8] They are a poor people with poor quality of weapons and armor,[6] wielding stone axes and wooden clubs.[7] They subsist by raiding local villages, small groups of travelers, and will attack even the Lord of the Eyrie if he is not properly protected. They take all weapons, grain, and armor they can find, as well as all women, whether they are wedded or not. Some women participate in raids. However, it has been hundreds of years since the clansmen have threatened the lowlands of the Vale with anything more serious than raids.[6]

The clansmen ride small horses that are suited to the narrow mountain paths.[9]

Archmaester Arnel listed the most notorious mountain clans in his work Mountain and Vale. These include:[8]

There are also smaller clans, usually formed after splitting off from one of the major ones in various feuds, but they rarely last very long before being either re-assimilated back into larger clans or destroyed by the knights of the Vale. Very rarely, a minor clan might survive and grow into a major one: the Burned Men are an offshoot of the Painted Dogs who split off from them soon after the Dance of the Dragons.[8]

The Painted Dogs are apparently one of the older clans: according to legend, King Roland I Arryn - grandson of the first Andal High King of the Vale - was slain by the Painted Dogs, which would make their clan thousands of years old.[10]

The Black Ears have close ties with the Moon Brothers, but do not have good relations with the Stone Crows.[6][3] 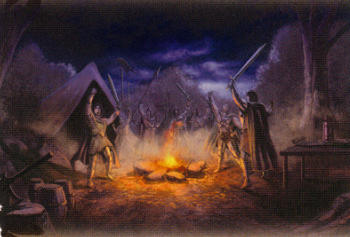 Rise of the mountain clans of the Vale, by Skysoul Visual Art Studios © Fantasy Flight Games

During the coming of the Andals to Westeros, Andals from Essos conquered the Vale of Arryn from the First Men. Some First Men submitted to and intermarried with Andals in the aftermath of the Battle of Seven Stars, but others refused to kneel. The First Men who fled from the fertile Vale proper into the Mountains of the Moon are the ancestors of the modern clansmen.[8]

There is fierce enmity between the mountain clans and the knights of the Vale,[11] and the clans do not trust the lowland lords.[6] Clansmen have been known to burn, plunder, and carry off women from the riverlands.[1]

Even after the Targaryen Conquest, the mountain clans have remained a persistent problem for House Arryn, the Lords of the Eyrie. In 54 AC, Lord Darnold Arryn and his brother, Ser Rymond, were slain when they pursued raiders from the mountain clans into the Mountains of the Moon.[12] Lord Arryn and his sons were killed by the Stone Crows in 97 AC, after which his young daughter Jeyne Arryn became Lady of the Eyrie .[13]

In 132 AC, starved by winter, raiders from the Mountains of the Moon descended upon the Vale in large numbers to raid and plunder. Lady Jeyne Arryn, a regent of King Aegon III Targaryen, was forced to leave her office in King's Landing to see to the Vale's defenses.[14] Her cousin, Ser Joffrey Arryn, frequently defended the Vale against the clansmen as the Knight of the Gate. When Lady Arryn passed away, Ser Robert Rowan led a royal host to enforce Joffrey as her chosen heir, though his army was attacked nightly by clansmen. His baggage train was frequently attacked by the mountain clans, and eventually Robert and many of his men were killed by falling boulders when the clansmen toppled half a mountainside upon his host. Lord Benjicot Blackwood, who took over Robert's host, later remarked about the tenacity of the starving clansmen.[7]

There are now at least three thousand warriors among the clans, though they have not been considered a significant threat for centuries.[9] 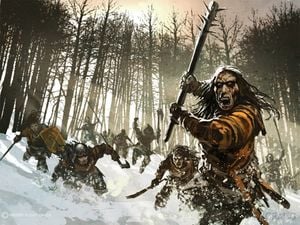 The clans have become more active since the death of Jon Arryn, Lord of the Eyrie.[9]

While returning from King's Landing, Catelyn Stark considers visiting her sister Lysa at the Eyrie, but decides the passes through the Mountains of the Moon are too dangerous.[15] After seizing Tyrion Lannister in the inn at the crossroads, Catelyn decides to bring him east to the Eyrie rather than north to Winterfell. Their party is attacked by clansmen along the high road[16] before they reach the Bloody Gate.[9]

After Tyrion wins his trial by combat at the Eyrie through his proxy, Bronn, Lysa has them leave the Vale of Arryn through the dangerous high road. Tyrion and Bronn encounter clansmen during their journey, however. In return for promising them the Vale, Tyrion enlists them to fight for his family, "Clan Lannister".[11] Three hundred clansmen fight alongside Tyrion in the Lannister vanguard during the battle on the Green Fork, with perhaps half of them surviving.[3]

Serving as the acting Hand of the King, Tyrion brings the clansmen to King's Landing, where they reside in barracks below the Tower of the Hand.[17] Without the benefit of House Lannister guardsmen, Tyrion uses the clansmen as his own guards and soldiers. Before the Battle of the Blackwater, he sends them into the kingswood to disrupt the army of Stannis Baratheon.[18]

After the Blackwater, red cloaks and Kingslanders prevent Chella and the Black Ears from returning to the capital. Timett returns to the mountains with the Burned Men, while Shagga remains in the kingswood with the Stone Crows.[19]

Arya Stark and Sandor Clegane learn that the mountain clans in the Vale are bolder as of late and are carrying steel.[20] 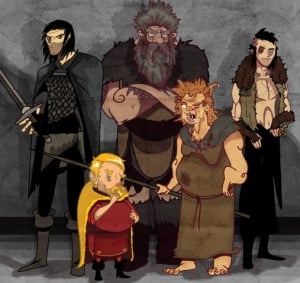 They were skeletons in skins, armed with stone axes and wooden clubs, but so hungry and desperate that they could not be deterred, no matter how many we killed.[7]

The mountain clans were lawless brigands, descending from the heights to rob and kill and melting away like snow whenever the knights rode out from the Vale in search of them.[15]

That was the trouble with the clans; they had an absurd notion that every man's voice should be heard in council, so they argued about everything, endlessly.[6]

Why should we trust your word? Lowland lords have lied to the clans before.[6]

He had more faith in their iron loyalties and sense of honor than in the greed of sellswords.[4]